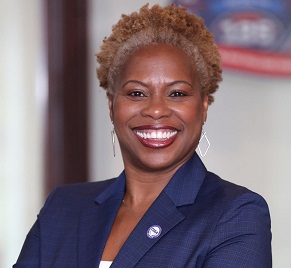 Mrs. McWilliams Parker spent nine years at the NCAA managing national championships to include both the men’s and women’s Division I basketball tournaments. She started her career in coaching, compliance and administration at Virginia Union University followed by career growth opportunities at the CIAA, Norfolk State University and Morgan State University prior to the NCAA.

Mrs. McWilliams Parker  was selected as a member of the 2013 class for Women in Sports Business Journal Game Changer. She was inducted into the Hampton University Hall of Fame, Temple University’s Gallery of Success, and the Sierra High School Hall of Fame.

She is the past president for Women Leaders in College Sports (2019-2020) and current member of the board. She serves on the board of directors for the John B. McLendon Scholarship Foundation, Samaritans Feet International and the NCAA Gender Equity Task Force. Additionally, she served as the chair of NCAA DII Management Council, a member of the NCAA Board of Governors and NCAA Cultural Diversity Committee.

Mrs. McWilliams Parker is a woman of faith, motivational speaker, and an active member of the Charlotte Crown Jewels Links Chapter of Charlotte. She has received numerous awards for her leadership and contributions to the community.