In 2017, through a partnership with WGL Energy, BSU invested in a large scale 1.6-megawatt solar panel system project across four sites on campus. This project estimates to be generating about 10% of the campus needs (2 million kilowatt hours each year).

BSU expanded solar panel installation in latter 2018 with the installation on the rooftops of the Fine & Performing Arts Center (FPAC) and Student Center (photo, upper right) with the assistance from General Electric utility company. These two buildings will help generate an additional 2% of campus energy needs. 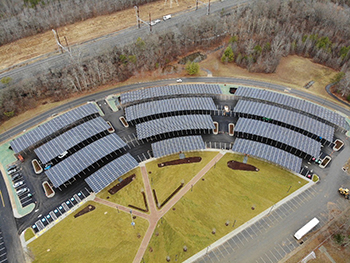 Parking Lot I. This new 400 space parking lot opened in February 2020 is located across from the athletic track, north of Parking Lot J, with a full solar canopy. This will generate roughly another 7% of campus energy needs.

BSU has invested in various forms of using solar energy for purposes of  trash compacting with capacity alerts; heating a swimming pool, and charging electronic devices, such as tablets and cell phones or small laptops.