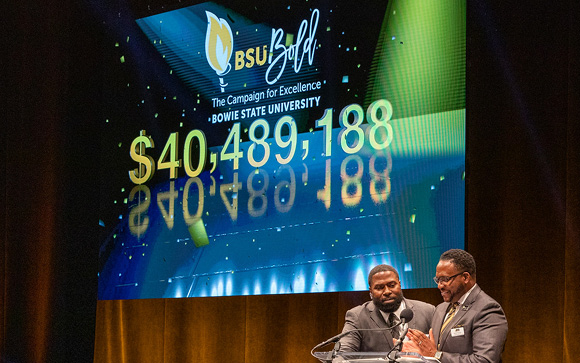 (BOWIE, Md.) – Bowie State University launched the public phase of its largest ever fundraising campaign on Dec. 9 with a combination live and virtual launch event simulcast from three locations. BSU BOLD: The Campaign for Excellence seeks to raise $50 million by Dec. 31, 2025, with a total of $40.5 million already raised.

A major catalyst for the Campaign for Excellence was a $25 million gift from philanthropist McKenzie Scott, alongside other local, national and international funders that have invested in Bowie State.  The program recognized some of the lead campaign donors such as BGE, Penn National Gaming, Adobe and the Maguire Foundation whose dollar contributions during the silent phase of the campaign laid the foundation for its ultimate success.

“These six and seven figure gifts from major entities are fantastic and greatly appreciated, but we also need the vote of confidence from individual alumni, family and friends of the university,” said Brent Swinton, vice president for institutional advancement. “We look to everyone who appreciates the value and importance of Bowie State to participate in the Campaign for Excellence together, as one Bulldog community.”

The innovative launch event leaned into technology and media to unite small audiences of invited guests celebrating simultaneously at three sites of historical significance to Bowie State. The Baltimore Center Club overlooking the Camden Yard – Ravens Stadium complex was illuminated in black and gold acknowledging the campaign launch and BSU’s 1865 founding in Baltimore. Since 1911, BSU has been the hometown HBCU of Prince George’s County: Celebrants gathered at the Hyatt National Harbor overlooking the Capital Wheel, also illuminated in black and gold for the occasion. The simulcast was anchored on the campus of Bowie State University where a third audience participated in the Fine and Performing Arts Center.

The launch event and simulcast highlighted the impact that lead campaign gifts are already having by providing funding for new scholarships, academic and technology support, and experiential learning opportunities preparing BSU students to become the next generation of leaders. Several key donors were live at each celebration location to connect with students and amplify the importance of their commitments.