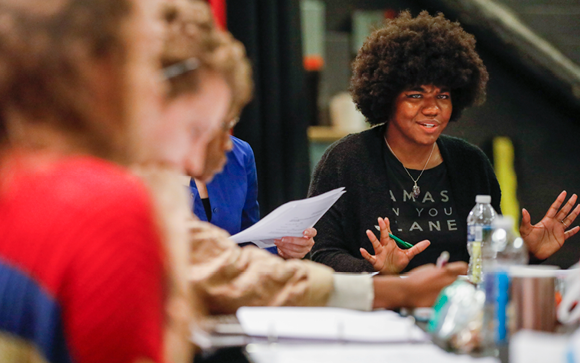 (BOWIE, Md.) – A staged reading of “How Can I Say This So You Will Stay?” is back by popular demand. The play will take place in New York’s Tank Theatre, but will be viewed online on Thursday, September 30 at 7:30 p.m. followed by a discussion of the social justice issues it explores.

“How Can I Say This So You Will Stay?,” originally performed in fall 2019 at BSU and the Kennedy Center, is inspired by a nine-month long virtual research project of Bowie State University’s Dr. Jacquelyn Sweeney and Kent State University’s Dr. Amy Damrow, and their undergraduate students. As a result of their research, the two published an article for “Teaching and Teacher Education” titled, “Beyond the bubble: Preparing preservice teachers through dialogue across distance and difference.”

Initially funded by the National Endowment for the Arts, the play follows a group of student teachers thrust into an academic study on the difficult dialogues one tries to avoid in life with those who hold different ideological space. As the students delve into topics ranging from Black Lives Matter to the contentious 2016 election, tensions permeate and the ways their politicized identities play out in their everyday life become clearer to them and those around them.

“We've talked about justice forever since the Civil Rights Movement to the social justice issues two years ago, and we're still in the same place,” said Dr. Jacquelyn Sweeney, BSU’s graduate reading coordinator and associate professor in Teaching, Learning and Professional Development. “It is our hope that people who see this will think differently about people on their community or outside of their community, and confront some of the issues depicted in the play with themselves or others in a non-aggressive manner.”

Since its initial production, the play welcomes a new director, Jenny Beth Snyder, and new playwright, Morgan McGuire, who both bring a fresh perspective. The play has been tweaked based on audience feedback and is now loosely based on the research conducted to help people think more deeply about the issues covered like diversity and social justice. The play includes 11 characters, which have been revised, along with new dialogue.

Also new is the virtual experience of the production. Following the play, there will be discussions where audience members from different geographical areas will be randomly paired to discuss the issues, followed by a dialogue with the playwright and actors.